The brain develops very rapidly in the first 3-5 years of life, and all the structure and building blocks are present by the age of 9. The different centres of the brain develop and become functionally connected over time. The last part to mature is the prefrontal lobe. This happens during adolescence. Many things affect brain development including genetics, individual and environmental factors.

Human beings are the only animals that are born completely helpless, and we have the biggest size of adult brain. If we were born with an adult sized brain our heads would not fit through our mothers' hips.Brain development that continues after birth also helps us better adapt to our living environment and increases our chance of survival. 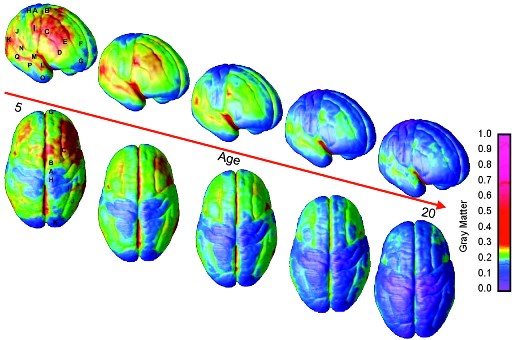 Some people like to think of the brain in 4 parts:

Adults who talk to children as they are growing up really help. A safe environment where they have consistent loving support is vital for the brain to develop well. Young people need adults to believe in them and encourage them. Teenagers respond better to rewards than to punishment. They need clear, consistent boundaries, and very importantly their growing capacity and ability to do things independently needs to be respected.

Another principle is that when connections 'fire together they wire together', so this is a vital time to develop good habits around activities like thinking in a positive way, eating and exercise as that wires together for adulthood. We know that the brain can change throughout life but it is much easier to get the 'wiring right at the start, in teenage times'. It takes a lot of hard work to rewire as adults.

It is now well established that if children experience any sort of abuse (verbal, emotional, physical, sexual or neglect), especially in the early years of life, it can affect how the brain is wired and functions. Sometimes this is hard to change, so it is very important to protect children throughout their development. This is especially important at times of peak brain development during pregancy and the first 5 years of life and during the second phase of brain development around puberty.

Alcohol and drugs (such as methamphetamine) can be poisonous to the developing brain, particularly during pregnancy and adolesence. Even one drink can cause a lot of damage at certain times of brain development.

During adolescene, exesting connections between brain cells are strengthened and set for life. Alcohol and drug use during this stage can affecting memory and organisation.

For optimal brain development, it is best to avoid alcohol until adulthood. If 15 to 17 year olds do drink alcohol, they should be supervised, drink infrequently and at levels usually below and never exceeding the adult daily limits.1

Figure 3 from article 'Dynamic mapping of human cortical development during childhood through early adulthood'. Volume 101, issue 21.  Copyright 2004. National Academy of Sciences, U.S.A.
Our grateful thanks to the National Academy of Sciences, U.S.A. for permission to reproduce the image on this page. Please note this image is copyright and requests to reproduce it elsewhere must be made to the copyright holder.

This page last reviewed 09 July 2018.
Email us your feedback